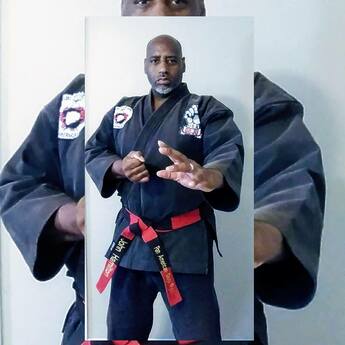 John Morgan Hamilton has 46 year training in karate. He is a licensed instructor in two world renown systems, where he holds a 7th Degree Black Belt in PanAmerican Goju Ryu and a 5th Degree Black Belt in USA Goju Ryu. He is retired Military with 22 years, experience in discipline and leadership serving in the United States Army. He has an array of professional skills alongside his martial arts background from serving in the Military. White Falcon Dojo (WFD) is based off two karate systems to include, close quarters protection (CQP), Weaponry, Aiki Jitsu, Taekwondo, Judo and Shotokan Kenpo. He is active in promoting the spreading of both systems of Goju Ryu Karate to build leadership in the students and the next generation of Karateka. Private lessons, teaching and mentoring his students to serve their community.

John Morgan Hamilton was born in 1965, in Cleveland, Ohio. His training in Karate started between the age of 10 and 11 years old at a local YMCA in a few blocks from his home. A traditional form of Taekwondo that sparked a light in him, later leading him to study with anyone on the streets with any knowledge in martial art, mostly street fighting. He was headed down the wrong road unit meeting a teacher by the name of Kyoshi Moore, owner of the Shotokan Kenpo Academy of Karate. His stay there was short due to his thirst to apply the knowledge he obtained from Taekwondo, Street fighting and the Shotokan Kenpo Academy of Karate. But the lessons of discipline and respect toward others stayed with him until he was at the age to join the United States Army in April 1987.

His first duty station in the Army was at Hunter Army Airfield, in Savannah, Georgia with the (1st Attack Helicopter Regiment, 24th Infantry Division). He was chosen to become the Battalion Commanders driver, later to include the entire Battalion Command staff. This appointed position led him to drive for his first Battalion Commander, a Lieutenant Colonels while also driving for the Battalion Command Sergeant Major. He was requested to stay on as the BC driver before the change of command, which added driving for a Special Forces Lieutenant Colonel from the United States Pentagon and the same Battalion Command Sergeant Major. This new environment only added to the journey of his life in the Military on the Aviation side of the house. His training intensified with the responsibilities of his position. He learned techniques in survival, weaponry, defensive and offensive driving, and the importance to detain or eliminate a person to ensure the safety of his Commanding Officer or staff. When Mr. Hamilton received orders to leave Hurter Army Airfield, he was awarded two out of the five highest peace time medals as a driver in all of Army Aviation History. He was the first soldier and Afro-American to achieve this honor. In March of 1994 while stationed at Ft. Stewart, Georgia he joined the Long Eagle Dojo under a teacher name Kyoshi Sinclair L. Thorne, a retired 1st Sergeant from the United States Army and his wife Renshi Delorus C. Thorne. His hard dedication and training to learn the rear art of USA Goju Ryu Karate was rewarded in June of 1994 when he received his Shodan (1st degree black belt). That same year he received his first honorable discharge from the United States Army and moved back to Cleveland, Ohio. In January of 1995 in Augusta, Georgia he was tested by Kyoshi Balfour Wright, Kyoshi Sinclair L. Thorne, Kyoshi Orlando Soto and Renshi Delorus C. Thorne, thus receiving his Nidan (2nd degree black belt). In that same year after competing in a tournament in New York city in front of Kyoshi Thorne, O'Sensei Grandmaster Peter G. Urban (Father and founder of USA Goju Ryu Karate) and hundreds of his Goju Ryu brothers from around the world. He later received his license to teach the rear art of USA Goju Ryu Karate on April 23rd 1995. In September of 1995 he opened his first Dojo (Falcon Dojo of USA Goju Ryu KarateDo) located in the CHRISTIAN MUSIC ACADEMY on 3130 Mayfield Rd in Cleveland Heights, Ohio. Later moving the Dojo into a local YMCA in Cleveland Heights to accommodate the growing size of his students. 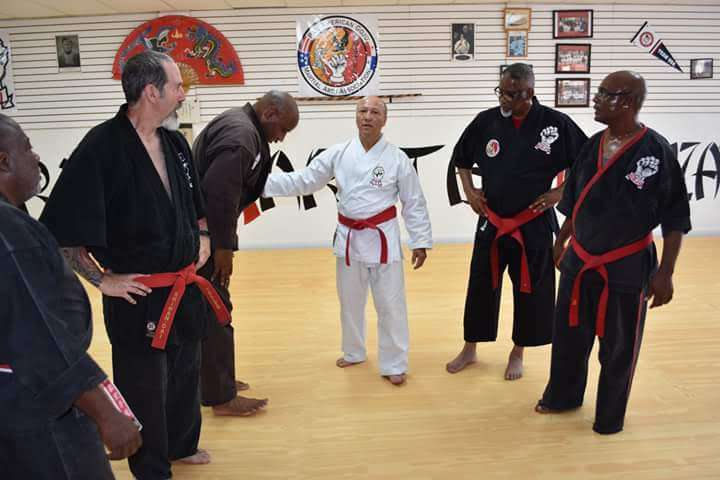 In Hinesville, Ga at the Eagle Dojo I was surrounded be founding students of USA Goju Ryu under the great "O'Sensei Peter G. Urban". It was a very humbling honor I will never forget. It was also the year (2018) I receive promotion to 7th Degree Black Belt from my teacher, Shidoshi Sinclair L. Thorne (PanAmerican Goju Ryu karate).

In 1994, I trained a lot with my teacher to understand USA Goju Ryu karate and the foundation of his system of PanAmerican Goju Ryu karate. This is part of the training I received in Aiki-jitsu. All day training with Shidoshi Thorne was a must once he knows a student will pass on what they have learned from him.
PanAmerican Goju Ryu, USA Goju Ryu, Renshi John Morgan Hamilton, Karate, Master John Morgan Hamilton, Martial Arts,