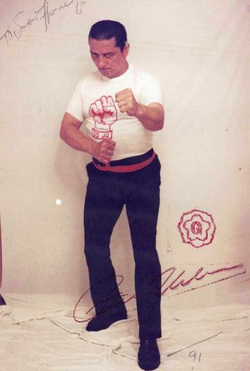 O'Sensei Peter G. Urban enlisted in the United States Navy in 1952, he is the founder of American GoJu Ryu Karate. He established his first Dojo in the United States in 1959, in Chinatown, New York City. The training there soon after opening his doors became famous for producing some of America’s greatest Goju Ryu fighters. He achieved a rank most where not able to achieve as an American in Goju Ryu. In fact, he was one of a small handful of Americans’ to accomplishment this. That and other stories shoot across the country like a sonic boom in 1966. The one most remember story told happened when O'Sensei Urban as a (Kyoshi, 7th Dan) went back to Japan to asking to be a reprehensive to the Budokai in the United States. He was told a “Gaijin” foreigner, would "never" be promoted to such a position. This upsetting news did not go over easy with O'Sensei Urban. He replied (Have you forgotten who lost the war). That was upsetting words from a student to his teacher and his loyalty was in doubt. With that O'Sensei Urban put his pinky finger on the table then replied (If you feel that I have insulted you, I will remove my finger). The counsel was shucked with great honor from his actions, yet it was one of Master Gojen Yamaguchi son's who respectfully intervened. Therefore, O'Sensei Urban left Japan, never to return. He returned to the United States later declaring himself America’s first 10th Dan, then publishing a book (America's first 10th Dan - The Man With No Fear). He formed the United States of American Goju Ryu Association that became world wide known as (U.S.A.G.A.). O'Sensei Peter G. Urban was first American to step up and do what many would never think of doing.

With the proclaim title came many challenges for some of his fighters and they held up to the reputation of being some of America’s best fighters. He also help establish the structuring on how karate tournaments in the United States are operated to this very day. O’Sensei Peter G. Urban is one of America’s greatest pioneer in karate and his actions cut the way for some of America’s greatest karateka. He will always be honor and remembered - always recognized as the father of American Goju Ryu Karate and our nations first 10th Degree Black Belt.

O'Sensei Peter George Urban was born on August 14, 1934 in Jersey City, New York. He passed on to our heavenly father April 7, 2004, he will always be greatly missed. 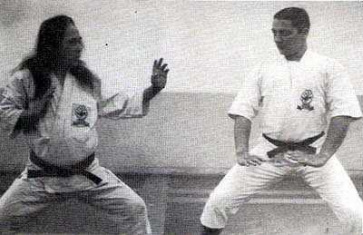 Gogen Yamaguchi (The Cat) and Peter G. Urban ( The Lion) 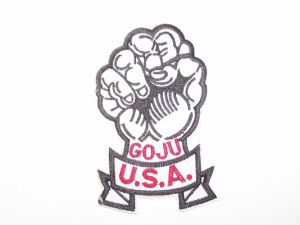 The introduction of martial arts is somewhat a vague one but according to historians, it’s wildly accepted that Buddhist Indian monks were the first patriarch of Chan or Zen Buddhism. They traveled from Kamchipuram near Madras to china’s Northern Province, crossing the Himalayas by foot and settling in the Songshan mountains at the Shorin Ji, which is known as the (Shaolin Temple). There introduction of a series of 18 exercises and 2 sutras called (Eikkinkyo and Senzuical) to the priests of the monastery. The exercises mimicked the movements of animals in Buddhidharma. The Shaolin priest refined what they learned developing it into a form of self-defense known as the Shoalin fist method. That method flourished throughout Asia and found its way to the RyuKyu Archipelago.

In 1429 under the leadership of Sho Hasgu, Okinawa became a unified kingdom. Sho Hasgu was set on making Okinawa known to the world by improving its relationship with other islands and countries so it open its doors to do business in commercial sea trading. In the next two centuries Okinawa grow famous for transporting luxurious goods. With this the method of self-defense also grow in towns like Shuri and Naha, they became center points. To cut down on the violence in 1447 a ban on all weapons was put out upon the noble people. This control refined their lifes to live under armed force and unarmed combat became a problem for the people. Sho Hargu Dynasty fell in 1470 and the time with no ban on weapons was short lived. In 1609 warlord Shimazu ban all weapons again. It was this ban on weapons that the Okinawan people clashed, they devised ways to protect themselves.

The Okinawan people turned to using everyday farming and fishing tools, their hands and feet. Weapons like the (Tetini Tempei), made out of deer skin rapped around two small poles which can’t be cut by the samurai sward when used correctly. Or the (Nunchaku) made with two sticks joined together by a rope. It was used to beat rice and beans, the (Tunfa, Sai, Kama) and an array of Bo’s, Chukon-Bo (Standard), Take-Bo (Bamboo), Kai (Oar), and the Maru-Bo (round). Various fist styles began to ban together and taught in private classes called (te), translated meaning (hand). By 1629 the banning together kicked in motion a entire new training method in secrete held in three cities. The form of (te) was taught in Shuri, Naha and Tomari sheltered as it became known for its violent ways of maiming or killing its opposites. In 1875 Okinawa became a part of the Japanese empire and the occupation ended with its bans on weapons. In 1903 the term (te) was replaced by the term (Karate) and the first Karate demonstration was haled that same year.

Goju Ryu KaratDo in the United States of America 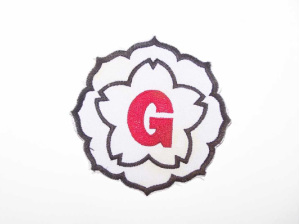 There is no way to name everyone that trained in Goju Ryu Karate or name the first instructor, this is impossible to do. So the history of Goju Ryu in the United States has its starting point with the pioneers who helped introduce and spread the style of Goju Ryu KarateDo.

Mr. Peter G. Urban was a student of Richard Kim of the Butokukai system, Gogen Yamaguchi in Goju Ryu and Mas Oyama in Kyokushinkai. He is the "only" person to ever study under three of Japan's greatest karate masters. He open his first Goju Ryu Dojo in New Jersey in 1959 and founded the world known U.S.A Goju Ryu Association (U.S.A.G.A.). Later moved his Dojo to Manhattan New York opening three other Dojo’s, one in Watertown, Massachusetts and Toledo, Ohio. He is known as the first person to actively promote the system of Goju Ryu Karate.

Mr. Anthony Mirakian was a student of Meitoku Tagi and opened a Dojo in Watertown in 1960. He is considered the first Okinawa Goju Ryu instructor in the United States.

Mr. Jack Coleman was a student of Kanki Izumikawa and opened a Dojo in Toledo, Ohio in August of 1959.